The iterative design process of ‘The DTDOT’

For many years now I have been a passionate designer who has kept sketchbook close to hand at all times.  I take my sketchbook everywhere with me and it would be fair to say that if I didn’t do a sketch-a-day, I would become a bit twitchy!

My sketchbook contains many design ideas and proposals to help solve every day problems that either spring to mind during the day, or come from something I observe whilst sitting ‘people watching’ with a coffee in a café.

I often show my sketchbook to classes I teach for two main reasons.  Firstly, so they are not too precious about always presenting ideas in a perfect format.  I encourage pupils to try and believe that good design starts from an initial idea, not a polished drawing!  Secondly, I show my sketchbooks so that pupils can see that I design everyday whilst just going about my usual routines.  The DTDOT ® was designed initially whilst trying to help a pupil draw simple isometric shapes to use as crates for some 3D design work.

At the end of the summer term I chose not to go on the usual school theme park trip.  Instead, I was allocated the task of supervising some pupils for the day that were not able to attend the trips either.  One of the pupils was quite happy to spend the day trying to learn how to draw isometric designs, as this was something that has frustrated him in lesson because he found it so hard.  I’m sure that many of you reading this article will have seen the type of drawings pupils produce if they find isometric drawing hard.  Quite often, an isometric top with a horizontal base.

I started to produce a sheet with some dots on for the pupil to join together, I produced some dots that when joined up would lead to a series of crates being produced of different sizes.  My initial thought was to leave it there are use this sheet in lessons when pupils needed the extra support.  Whilst I was talking to the pupil, he said that he wouldn’t want a ‘special sheet’ in class, and pushed me on to try and design a drawing stencil that would be suitable for the full range of ability.

I initially made two stencils from card to try out with the pupil on a laser cutter.  One was a complete matrix of isometric dots and the other was a matrix that focussed on a simple isometric cube that I thought could be used to draw cubes side by side to make crates of varying size. 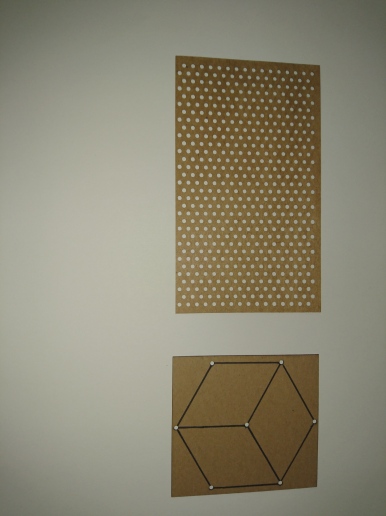 Whilst the matrix of dots confused the pupil in the same way the underlay did, the simple isometric cube was a BIG hit and was considered a bit of a design breakthrough! The pupil loved the new stencil and drew cube after cube….after cube!  There was still an issue with using the new stencil to draw crates of different sizes due to the mind’s eye not being able to picture where the next set of dots would be.

Like many a great solution, it came to me after lunch.  I decided to extend one face of the cube AND number the dots so that I could adopt a ‘dot-to-dot method of explaining which dots to use.  Within minutes, I could write a series of numbers down in a line that we both understood to be an isometric shape….it was for the pupil, a secret code to isometric success!

At this point I was buzzing with excitement!  I had included a pupil in the design iteration of a real product that I know there is a need for. The pupil that really struggled with isometric drawing help me bridge the gap between being a teacher to designer and company owner.  There is no doubt that the iterative design methodology was used to create DTDOT ®.  I got to spend a day thinking and designing, testing with a client, observing my prototype and tweaking the design until I had a basic working concept.

The rest of DTDOT ® came about from having a working knowledge of what pupils want when then design.  Arrows, ellipses, a ruler and some of the other shapes came about from another series of iteration that continued for some time later.  The corners are cut to radii of 5, 10, 15 and 20mm so that pupils can add borders to pages or background boxes to designs.

The sun and sunglasses are to be used so that the pupil knows where the light is coming from to help render the design using three tones.  The rendered cube at the bottom of the DTDOT ® shows how this is done.  The ellipse shapes are placed in such a way that you can’t actually place them on a drawing a wrong way round due to the fact they are placed in the corner of an isometric cube in context.

The feature my pupils use the most though is the curvy arrow at the bottom, they use this twice, back-to-back to give a recycled type symbol.  I encourage all my pupils to write at least one annotation point about sustainability issues or the environment, because the funky arrow is there, they all just do it!

Things moved quickly with the DTDOT ® so that the design had some protection.  I already had a working website, www.dtresources.co.uk and had registered the web domain name as a limited company ‘DT Resources Limited’.  As the DTDOT ® was to be the flagship product of my company, and knowing that The DTDOT ® would feature on social media at some point, I had to protect the design right of my product with the government Intellectual Property Office (IPO), this involves sending design work to the IPO so they can search to see if the design you are submitting can indeed be protected.  I was delighted and very proud that on 28th August 2015 ‘The DTDOT ®’ became a UK Registered Design.

Since release The DTDOT ® it has been selling well and is now used in many schools, mostly in the UK, but some have even been shipped out to Australia! On Twitter #DTDOT is used to show what teachers and students are using the stencil for.  I just hope, that like the pupil I spent the day designing with, all pupils can design in isometric if they couldn’t before!

I have new products ‘in the pipe line’ and hope to continue to develop and make Design and Technology resources whilst maintaining my current role as a teacher and Head of Department.

I would like to thank @kpearsondesigns for producing the DTDOT resources poster – fantastic work! 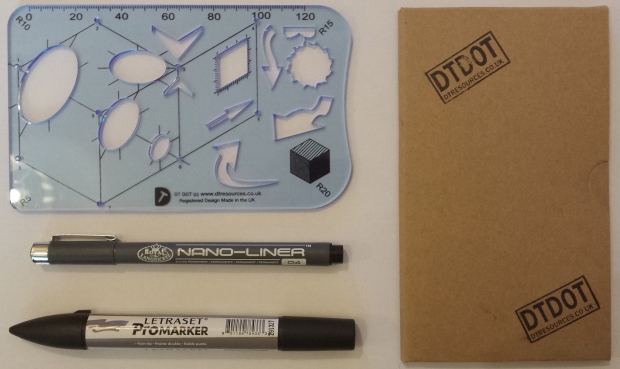